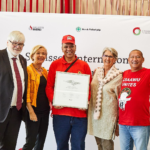 It is an honour for me, on behalf of the prize Committee to congratulate Commercial, Stevedoring, Agricultural and Allied Workers’ Union (CSAAWU) with this year’s Arthur Svensson International Prize for Trade Union Rights.

You are now entering an exclusive community of previous recipients of the award. Some of those recipients would like to congratulate you as well.

Since 2010 the Arthur Svensson prize has annually been awarded to trade union activists who stand up for solidarity and justice.

It makes me proud to look at the list of award recipients.

On the list we have persons, unions and organisations that promote trade union rights and human dignity.

Their contributions make a difference for workers.

They make a difference in their branch, their country and in their region.

Our recipients represent labourers from different sectors: from miners to teachers. From farm workers to textile workers.

They come from different countries: Mexico, Zimbabwe, Bahrain, Palestine, Cambodia, Russia and South Africa. In addition we have LabourStart which is global.

It may look like the recipients are very different. But they have a lot in common. They are all bound together in their efforts to promote the rights of working people. They all take great risks to stand up for their beliefs. All of them risks a lot. Some risk it all. All know that even though an individual can be week, nothing is stronger than people standing together. Together as unions from Cambodia to Mexico. From Norway to South Africa. We can make a difference. Because solidarity matters.

Our award winners are true working class heroes. It is hard for us to imagine the risks they take and the sacrifices they do.

Industri Energi has awarded the Arthur Svensson international prize for trade union rights eight times. It has been a pleasure. I have only one regret when it comes to this prize. And that is the fact that it becomes more and more relevant.

Every year the need for union rights champions grows stronger. Every year the gap between working people and the rich people increases. Every year the shareholders and owners of corporations find new ways to organise their business. Organise it away from responsibilities and commitments to their workers, their host communities and countries.

There is only one way we can meet this development. We have to organise workers. We need strong and bold unions. In a world without organised workers there will be no justice. Too many businessmen think the business of business is to do business. And too often this is done by exploiting the workers. Our movement has never been based on what we were given. It is based on what we have claimed.

Our movement is strong when we stand together (and weak if we don’t). Together we can oppose exploitation and embrace solidarity. This was the spirit of Arthur Svensson And it is the spirit of this international price for trade union rights.

A strong union in one country is good for workers in all countries. We find inspiration and hope when we see brave and successful unions.

We were all shocked by the documentary “Bitter Grapes”.

The film gave us a glimpse of the working conditions of men and women whom produce wine for the Scandinavian market.

– and attacks on the right to organise

It documented violations of international labour and human rights standards.

The documentary also gave us inspiration and hope. CSAAWU gave us hope that farm workers whom are often very hard to organise can be organised and can claim their rights.

Most Norwegians find it hard to imagine what the South African farm workers are going through. Others can recognise parts of it. Because also in Norway, a country where we have strong unions and a solid welfare state, we see the rights of working people being attacked.

All over the world vulnerable groups are at risk of exploitation;

Reduction of permanent employment is a global trend. A whole industry of agencies, middle-men and labour brokers has emerged. The consequence is a complex labour market where it is hard to tell who the employer is. The consequence is that workers’ salaries and benefits have been reduced.

As trade unionists we cannot accept violations of national and international labour standards. We have to fight this tendency. And we have to organise.

CSAAWU has risen to organise and protect exploited workers. With few resources you have been able to create a significant union. You have organised strikes and direct action. You have inspired people to stand together, even when the risk is high. You have first-hand experience fighting cynicism.

You are a true inspiration and you give hope to union activists all over the world.

We will stand together with you in solidarity and demand decent working conditions and wages.

And we would like to honour you with this price.